The skin grafts to repair small wounds on the edges of John’s flap surgery sites  and drainage sites were not successful. So, the wound healing did not get the boost that we had hoped. John is still on a laying flat protocol until these wounds very slowly get better. Because there is little progress presently taking place at VIBRA, insurance is not going to approve payment for John remaining here much longer.  His case working is trying to get approval for a Dolphin Bed at home. It looks like he will be transported home in a couple of weeks. We will work with the Newport in home health care nurses to continue the wound healing and then start our own sit up trials. Once John is able to sit for several hours at a time, we will try to get into a rehabilitation program.

One year ago from today, I had a ½ mile drive home. I was in the Middle of nowhere, near the end of the world (buras, LA). I was following a friend back to the house, and decided to have some fun and speed home. I only had one turn, and I took that left turn as fast as I thought my modified ford f250 could take it. Half way into the turn, it felt like my wheels buckled in the front end. I starred ahead and saw I was headed straight for a power pole (an image I don’t know if ill ever forget). I thought about which way I should turn to avoid the pole. It was too late. I tried to open the door and get out to check the damage, but my arms wouldn’t come uncrossed. I didn’t hurt, I just couldn’t move. The lucky part of the crash, was that I did it directly in front of the local fire department. A female firefighter was at my window within seconds. She first asked me who was in the other car, and I acted as if I didn’t know what she was talking about, (I wasn’t giving up my friend). We then spoke for a minute about my condition. At that time I don’t think she knew how badly I was hurt, neither did I! I had no bumps, bruises, cuts, scratches, nothing but a severely broken neck. I wasn’t wearing my seatbelt, and it’s my opinion that the airbag broke my neck. She asked who to contact and I told her to call Matti and not call my mom, because she had been through enough already. I had recently lost my stepdad and niece to a plane crash. She told me to just relax and wait for more help, that’s the last I remember. I would say around a month/month and a half after the crash I became consciously aware of my condition and began to remember each day. My family tells me I was awake and conscious During that time, but I have a much different recollection than what was reality.

Well I ran out of time to finish my story. Typing by mouth is very tedious. There is a lot more about the past year that I would like everyone to know, hopefully I will get it written down soon.

The skin grafts were done this past Friday. We won’t know how well they have attached for about a week, when the bandages will be removed. John spent two evenings at Legacy Emanuel after the surgery, before heading back to VIBRA.

When the doctor saw John on Friday, he decided not to do the bone scraping procedure because the tissue in John’s wounds have been filling in so nicely. The better nutrition is having a positive affect.  The doctor did schedule a skin graft procedure for Friday June 26 at the Legacy Emanuel Burn Center.  It looks like it will still be quite a while before sit up trials are attempted again. This past Sunday and Monday, high school friends, Matt and Mike visited and kept John entertained. Fathers Day brought visits from Charlie and Lucas.  Friends and family really make the hospital a more tolerable place.

Because they still do not want John sitting up, they have moved him back to the sand bed. He has developed a new small bed soar on his elbow. The open spots on his flap surgeries are healing very slowly. John is now being given a steroid to help his body with the healing process. I have started making some of his tube feedings in the hopes that better nutrition will also help. Today John had grass fed beef, sweet potatoes, kale, whole grain brown rice, blueberries, flax seeds, and turmeric  all blended in our new Vitamix. The nurses can not give him what I make, so if I can’t be here, John gets what the cafeteria whips up. In two weeks, the surgeon will do a bed side deep cleaning of John’s elbow wound.

Sorry that it has been so long between posts. There has just been very little to report. The sit up trials have been stopped again. There are a few spots on the edges of the flap surgeries that are beginning to open up. The doctors are meeting this week to brain storm options. They may do some additional surgery, change the bandaging protocol, or start John on a steroid. As always, the high point of any day is getting to see Charlie. In the photo below, she is giving daddy cuddles. 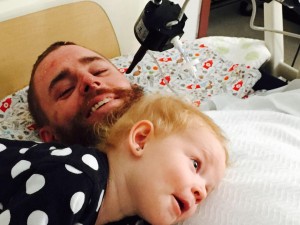 They have been proceeding with the sit up trials very slowly. They are taking it gently to not damage John’s flap placements. They also have to deal with John’s extreme dizziness when he sits up. It turns out that it is difficult for the body to reroute blood when someone has been lying flat for so long.  He is up to 45 minutes, twice a day in his chair. Corey headed back to California yesterday. He will be missed.

The doctor who performed the flap surgeries saw John yesterday. He has started the sit-up trials again. For now, they will just take place in the bed.  Last Sunday, John celebrated his birthday in hospital room along with  a whole host of family members and cheese cake. Corey has been in town, so the boys have been having slumber parties with very little slumbering.

The sitting trials have been stopped until John’s  doctor  can come and look at his back side. When John was moved to a chair to sit up, there was some slight sheering to one of the flaps. The doctor is expected to be at VIBRA this coming Wednesday or Friday.

John has started “sit up trials”. For the first two days he sat up elevated in bed for two sessions of 15 minutes each. Today, the two time periods will be extended to 30 minutes each. The time periods will increase every two days until he is sitting up in bed for 90 minutes, twice a day. They will then move sitting trials to a chair starting back at 15 minutes.  As long as his flap surgeries look healthy they will continue the trials. He does have a small area where the flap did not take, but this should not hold up the trials. When he can sit up in his chair for two 90 minute periods without new damage to his backside, they will approve his move to the Rehabilitation Institute of Oregon.  At this time, sitting up tends to make John very dizzy. We hope that this gets better with time.